An occupational hazard of sometimes having to write 10-12 blog posts in one day, on short notice, is that sometimes I miss the mark. (Try it sometime, at the end you feel like you’ve been trepanned. One of the most impressive things about Ed is that he can do this, day after day, without setting so much as a toe wrong.)

Such a thing happened yesterday with this post about the DC height limit. As numerous commenters and correspondents convincingly pointed out, what seemed like a simple and easy point is muddled, and what seemed like edgy wit is nothing more than a cheap shot at old people. I sincerely apologize both for a lame post and being pointlessly offensive. 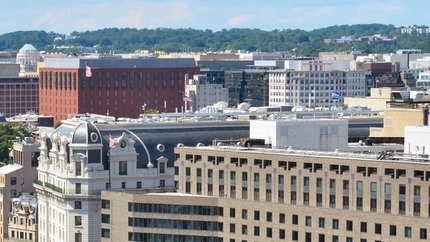 But let me explain more clearly what I meant, and perhaps it will be possible to see where I’m coming from. I believe shelter is, roughly, subject to the basic action of supply and demand. Therefore, statutes decreeing that one can only build buildings so high increase the price of shelter, by restricting the supply of additional housing and office space. What’s more, the DC limit ties height to the width of the adjoining street, so additional tallness can only come at the expense of more space dedicated to roadway.

This is how I explain both the yawning gap between the shelter prices of DC and Houston, and the fact that DC is extremely sparsely populated by high-rent city standards, less than one-third as dense as Brooklyn, and only a fifth as dense as Paris.

Additionally, there are environmental, technological, and long-term growth reasons to favor more density, but I’ll leave those aside. (See here for an in-depth discussion.)

Now, things are much more complicated than that; arguably a tangled regulatory framework and other restrictions like setbacks and parking minimums are the bigger culprit in terms of restricting density overall. But height limit reform seems like the place to start building a new pro-density coalition. Downtown DC, which would be most affected, has the biggest potential for new tax revenue, and it’s where most people work. Cheaper rents and lower taxes means a salary increase for everyone!

What frustrates me about this debate is how defenders of the status quo typically don’t even address this point, and instead focus almost entirely on character or aesthetics. To the extent that economic arguments are addressed at all, people typically claim that since new buildings now tend to be luxury apartments, if restrictions are relaxed all new building will be luxury apartments. I think this gets things backward.

Anyway, to my eye, outside of the Mall-Capitol-White House area, DC is a fairly dull city architecturally, full of quaint but crumbling rowhouses and whole lot of boxy 70s office buildings. Maybe I’m just a blinkered philistine, but in my view removing the height limit (and similar restrictions across the country) would provide substantial economic benefit to a great many people while doing little harm to the city’s overall aesthetic merit.