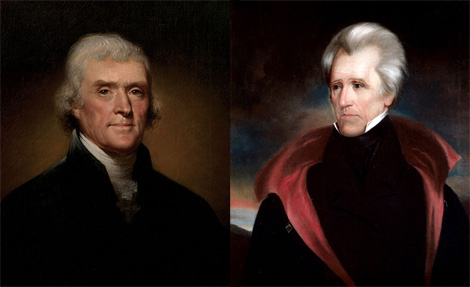 You had to figure this was coming (per the Connecticut Post’s Neil Vigdor):

Thomas Jefferson and Andrew Jackson are history in Connecticut.

Under pressure from the NAACP, the state Democratic Party will scrub the names of the two presidents from its annual fundraising dinner because of their ties to slavery.

The decision is believed to be unprecedented and could prompt Democrats in other states with similarly-named events to follow suit.

As briefly discussed here in response to an essay from Jonathan Chait suggesting the Party of Jackson had become the Party of Obama, the trouble with identifying the Democratic Party with either of these early presidents goes beyond their status as slaveholders. There’s also Jackson’s championship of virtual genocide against Native Americans, his hard-money policies, and his support for states’ rights, too, though they obviously stopped short of tolerating Nullification. I argued that Jackson’s truest successor was Andrew Johnson, who savagely fought the Confederacy but was a thorough-going racist who opposed not only reconstruction but the Civil Rights Amendments to the Constitution, which pretty much made twentieth century liberalism possible.

As for Jefferson, you could make a decent case that he is the father of “constitutional conservatism” given his strong limited government beliefs yoked to a preoccupation with eternal natural rights–though the claim that he was actually against separation of church and state is absurd.

In any event, the myth of a Democratic Party with a heritage that stretches from Jefferson and Madison on through Jackson and Tilden and Cleveland and Wilson and right up to FDR and beyond was always pretty much an artifact designed to keep the Solid South in the White Man’s Party. It stopped making much sense at all during the Civil Rights Era, and has been an unreflected-upon anomaly since then.

Yes, there are certain egalitarian strains in both the Jeffersonian and Jacksonian traditions that still resonate with Democrats today–but then they invariably involved basing the equality of some men upon the subordination of others.

It’s true that the identification of the Democratic Party with Jefferson and Jackson via annual fundraising dinners is no stranger or more significant than the continued Republican appropriation of Abraham Lincoln. For that matter, it may be time to come up with a better format for financing state and local parties than an annual dinner where every elected official in the room is encouraged to drone on for hours.

Who should replace Jefferson and Jackson as ghostly patrons of these events? Without question, after he leaves office Barack Obama is an obvious choice. For now I’d say FDR-JFK could serve pretty well, or at least better than two nineteenth century southern slaveowners who believed in strictly limited government. Offer any suggestions of your own in the comment thread, please.