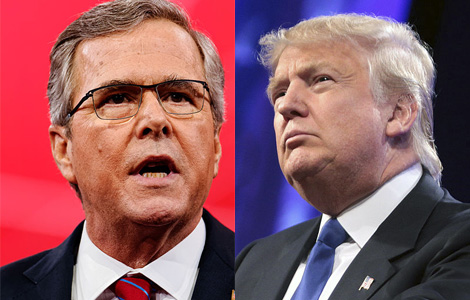 One of my working hypotheses this year is the possibility that partisan polarization has made a hash of traditional “electability” arguments for this or that “moderate” presidential candidate for the simple reason that swing voters are harder to find and harder to sway than in the past.

The data are a bit unclear on the subject just yet, and the cycle is still young. But new CNN/ORC poll findings today should provide a very rude shock to those who think Republican voters will finally wake up and realize Donald Trump would be a disaster as a general election candidate and stampede instead to a “grown-up” like Establishment fave Jeb Bush.

At this particular moment, Donald Trump is running better than Jeb Bush in trial general election match-ups with Hillary Clinton. You heard that right: Trump is pulling 45% to HRC’s 51%, while Jebbie’s at 43% compared to Clinton’s 52%.

Yes, yes, yes, it’s one poll and it’s early. But it’s another blow to the iron confidence of Establishment Republicans and MSM types and political scientists that all this “populist” nonsense will blow over and Republican voters will obediently fall in line for the candidate with the most endorsements by party leaders. If said leaders cannot even convincingly demonstrate that Jeb’s more electable than Donald Trump, why would Caucus and primary voters follow them over the cliff to support a guy they clearly don’t like?