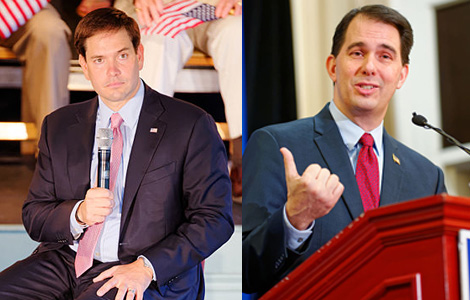 If yesterday’s polling eye candy was the probably-an-outlier set of surveys from Quinnipiac showing Hillary Clinton’s support all but collapsing in Iowa and Colorado and dropping a bit less calamitously in Virginia, today’s is an interesting new sample of Republican activists (a Democratic counterpart will be released later) tested by HuffPost Pollster in conjunction with YouGov.

The 500 activists chosen met this test (per a write-up from Mark Blumenthal and Ariel Edwards-Levy):

The screening criteria were as follows: registered voters who think of themselves as Republicans, say they would vote in a Republican primary in their state and say they have either run for office, held elected public office, been a paid staffer for a political campaign or elected official, been a party official, or substantively contributed time or money to a campaign.

So this sample combines the elected and party officials who are constantly watched for endorsements with the top tier of rank-and-file activists. Unlike the broader populations usually polled, these folks are familiar with nearly all the candidates, and they were asked about the field’s viability and electability along with the activists’ own preferences.

The poll does show a clear top tier of candidates currently perceived as both worthy of support and electable by the activists. By those measures, Walker and Florida Sen. Marco Rubio currently stand well above their rivals.

Walker earns a few superlatives. Alone among the candidates, he’s viewed “very favorably” by more than half of the activists surveyed. Just 5 percent say they wouldn’t back him under any circumstances. He’s also seen as the kind of candidate who could build a strong consensus: 61 percent of activists believe Walker would be acceptable to most Republicans, and 59 percent think he’s capable of winning the Republican nomination. Fifty-five percent think he’s also capable of going on to win in November.

Rubio also outscores most of the Republican field on those measures, rating just below Walker. Forty-eight percent view him very favorably, and 58 percent think he’d be acceptable to most Republicans; 57 percent and 51 percent, respectively, say he could win the nomination and the general election. Only 8 percent say they’d never consider voting for him.

The big loser in this survey has to be Jeb Bush. Electability is supposedly his strong suit. Yet only 39% of the activists in this survey rate him as a general election winner. He ranks sixth among the candidates in combined first and second preferences, below not only Walker and Rubio but also Trump (!), Cruz and Carson.

The survey also found significant overlap between the Bush and Romney constituencies, as you might well imagine. But you have to figure Walker and Rubio are a bit stronger competition in 2016 than were Perry, Gingrich and Santorum in 2012.

I hope the HuffPost Pollster folks keep coming back to this sample now and then. It’s a pretty interesting combo of elite and “base” opinion.