Gallup looked at Trump’s one-month job approval ratings and found that he is 21 points below the average for recent presidents. As of mid to late February of the first year in office, the average job approval for the last 10 presidents has been 61 percent. Trump is currently at 40 percent.

But what is actually more informative is to look at those numbers by party breakdown. 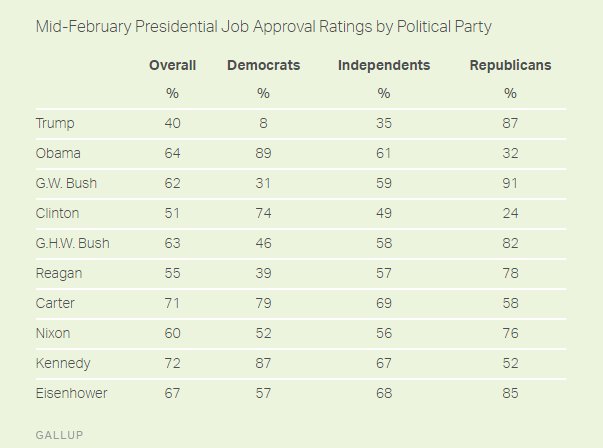 When it comes to Republicans, 87 percent approve of the job Trump is doing. That is better than any of the other Republicans, except George W. Bush — who was at 91 percent with Republicans at this point in his first year. In other words, partisan Republicans love this president.

On the other end of the spectrum, Democrats almost universally disapprove of Trump. Only 8 percent approve of the job he’s doing, whereas for previous Republican presidents, those numbers have been above 30 percent.

But check out the Independents. Only 35 percent approve of the job Trump is doing. That is 23 percentage points lower than the average.

In summary, Trump’s approval numbers aren’t historically low because Republicans fail to support him. They overwhelmingly approve of what he’s doing. It is because Democrats and Independents don’t approve. Those numbers are validated by a recent poll from Pew Research.

It is important to keep numbers like this in mind when reviewing Trump’s activities over the last few days. Following his press conference and rally in Florida, the message in the mainstream was that the president lied a lot and seems to be living in a delusional world of his own making. But right wing media told us that we don’t get it…Trump supporters loved it.

The trouble with that line of thinking is that Trump didn’t need to shore up his support from Republicans. His dismal approval ratings come from his lack of support among Democrats and Independents. The performances we’ve seen recently are only going to make that worse for the latter group (he obviously can’t go much lower among Democrats).

In the end, Trump’s need for constant adulation will mean that he continues to try to govern in a mode that is better suited to a presidential primary — throwing out red meat to his base. That will not only polarize the electorate more than is already the case, it weakens his overall support. Can a major party function with a 40% (or lower) approval rating? We’re about to find out.