* After outlining why our NATO allies have reason to be worried about what Trump did/didn’t say in Brussels, Heather Digby Parton sums things up with this:

This is a very delicate moment. After two worldwide conflagrations in 30 years Europe and Japan more or less disarmed and for more than half a century the Europeans have depended upon the US security umbrella. But twice now in the last 16 years we’ve elected unqualified leadership through dubious electoral processes. Under the first a group of ideologues used that immense power to destabilize the middle east at the worst possible time. Now, with this neo-fascist buffoon who seems to be tilting toward Russia for obscure reasons they are understandably getting very, very nervous. As should we all. So, it’s likely they are going to arm up. So are a lot of others. And it looks as though we’re going to help some of them by “making good deals” for arms manufacturers.

What could go wrong?

* Hillary Clinton is back in the news today. She gave the commencement address at her alma mater Wellesley College. Here’s a great clip where she reflects on some parallels with the past.

* Clinton’s speech also included some discussion about our culture’s recent assault on reason.

“You are graduating at a time when there is a full-fledged assault on truth and reason. Just log on to social media for ten seconds. It will hit you right in the face. People denying science, concocting elaborate, hurtful conspiracy theories about child-abuse rings operating out of pizza parlors, drumming up rampant fear about undocumented immigrants, Muslims, minorities, the poor, turning neighbor against neighbor and sowing division at a time when we desperately need unity. Some are even denying things we see with our own eyes, like the size of crowds, and then defending themselves by talking about quote-unquote ‘alternative facts.’…

“Why does all this matter? It matters because if our leaders lie about the problems we face, we’ll never solve them. It matters because it undermines confidence in government as a whole, which in turn breeds more cynicism and anger. But it also matters because our country, like this College, was founded on the principles of the Enlightenment – in particular, the belief that people, you and I, possess the capacity for reason and critical thinking, and that free and open debate is the lifeblood of a democracy. Not only Wellesley, but the entire American university system – the envy of the world – was founded on those fundamental ideals. We should not abandon them; we should revere them. We should aspire to them every single day, in everything we do.

“And there’s something else. As the history majors among you here today know all too well, when people in power invent their own facts, and attack those who question them, it can mark the beginning of the end of a free society. That is not hyperbole. It is what authoritarian regimes throughout history have done. They attempt to control reality – not just our laws and rights and our budgets, but our thoughts and beliefs.”

* We also got the first post-election profile on Clinton from Rebecca Traister. You’ll want to read the whole thing to get interesting reactions from both the former candidate and her staff. One example that stood out to me was when Clinton and Traister discussed the reaction to her recent conversation about the election with Christiane Amanpour in which she identified Comey’s letter as one of the reasons she lost the election. It strikes me as pretty typical of how the media boxed Clinton in.

After the exchange, Clinton and her aides had appeared upbeat. The crowd had been enthusiastic, and there was a sense that Clinton had done something that she has long found difficult in public: She had been herself — brassy, frank, funny, and pissed. But on cable news and social media, another reaction was taking shape. The New York Times’ Glenn Thrush, who has reported on Clinton for years, tweeted “mea culpa-not so much,” suggesting that the former candidate “blames everyone but self.” Obama-campaign strategist turned pundit David Axelrod gave an interview claiming that while Clinton “said the words ‘I’m responsible’ … everything else suggested that she really doesn’t feel that way.” Joe Scarborough called her comments “pathetic”; David Gregory suggested she was not “taking real responsibility for the fact that she was not what the country wanted.” And in the Daily News, Gersh Kuntzman delivered a column that began, “Hey, Hillary Clinton, shut the f— up and go away already.”

Later, Amanpour would tell me how surprised she was by the negative reaction. “The idea that she shouldn’t mention the Comey letter when the entire nation and the most respected statisticians are considering its impact is so strange,” she said.

* This was a powerful exchange between Senator Stabenow (D-MI) and Trump’s budget director Mick Mulvaney.

"Yes, that's called having a country, with all due respect." —@SenStabenow to Donald Trump's budget director Mick Mulvaney pic.twitter.com/wes5FMDA4U

* Finally, on a lighter note, I’ve decided to take up a bit of gardening at this late stage in life. We’ll see how it goes. But I can’t tell you how much I enjoy sitting on my patio with these bright faces looking up at me (my first potting attempt, so don’t judge me too harshly). 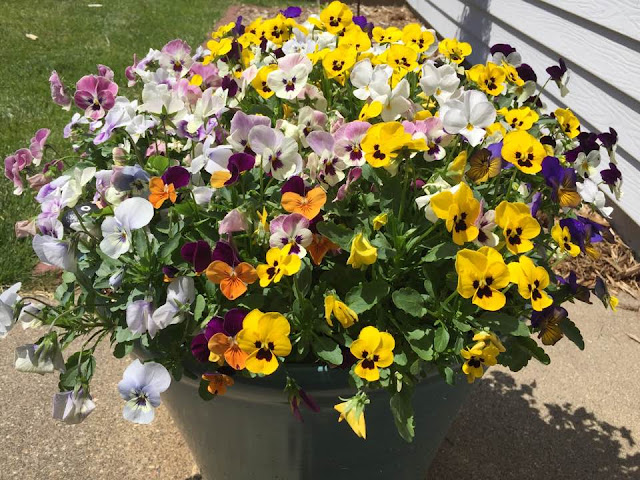